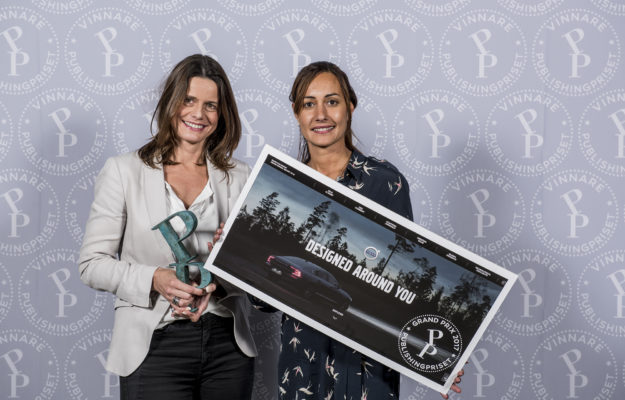 What made you decide to compete in The Publishing Prize?
“We have actually looked at many different contests before we decided to join this one, just as we did last year. In 2016, we won both the print and online categories. Furthermore, we look at international contests, where we also won this year. This is a very happy year for both of us, obviously. We also joined a British competition run by the Investor Relations Society. And for Sweden we chose The Publishing Prize because we think this is a well respected contest,” says Jeanette Gustavsson.

Describe the difference between making an annual report for the web as compared to making it on paper?
“Well, the print version is more extensive. It’s living up to many legal requirements as well. In the web version, we have a bit more freedom when we approach the audience,” says Annelie Nyberg, Investor Relations Manager at Volvo Car Group.
“I’d like to add that we see the online report more as a complement to the printed version. We see there could be a different audience, actually, for the online version as well, so we need both versions,” says Jeanette Gustavsson.

You first won the Online Annual Report category and then The Publishing Prize Grand Prix – Web. Were you surprised?
“A little bit. The Grand Prix was new to us, and we are very humble and very happy about that prize. Good teamwork,” says Jeanette Gustavsson.
“Yes, I totally agree. Even though you are a nominee, the competition is very intense, so it wasn’t at all obvious that it should happen. The Grand Prix was really a nice surprise. And remember, many people at Volvo Cars have been involved in this,” says Annelie Nyberg.